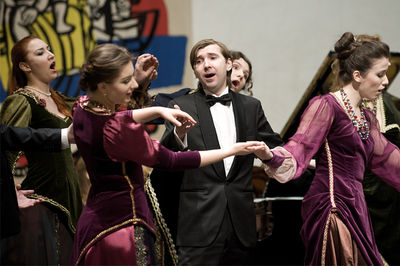 Boris Pevzner's Moscow Theatre is the first Choral Theatre in the modern history of music. During almost twenty-year-old life of the group it has worked out its own unique style and acquired a lot of followers and fans.

Founded in 1991 by well-known conductor Boris Pevzner, the theatre has recruited talented and skillful singers. All of them are brilliant individuals giving their own solo concerts at the same time. Many of them are laureates of International and Russian competitions.

The theatre is multi-genre. Every tern is a small performance. Based on the traditional chamber manner, the theatre plays musical miniatures immersing the audience in the specific emotional world. You find yourself now in the European salon of the XIX century, now in the Russian province, now in the Jewish small town .... Boris Pevzner's theatre tends to play musical cycles united by the common stem, thus "the concert of persons" ─ the new style having no analogs in vocal ensemble practice ─ is being born and embodied.

There is one more soloist of the theatre - the grand piano. Elena Grechnikova enriches the artistic pallet of the ensemble by the symphony sound of the piano. She is the rightful co-author of all creative ideas of the maestro.

Moscow Russian theatre appears in Russia and abroad, participates in radio-and TV programs, takes parts in musical festivals "Moscow Autumn", "December Evenings" and "Russian Winter". Together with Moscow concert society and the chamber orchestra "The Seasons" it is the organizer of the festival "Mozart, you are God ..." The group participated in joint projects with Vladimir Spivakov and "Virtuosos of Moscow", Yu. Bashmet and "Moscow soloists".

The theatre has recorded some CDs.