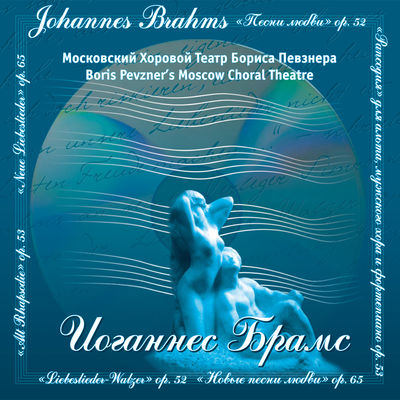 Texts of «Waltzes of love» op. 52 are taken from «Polidora» by George Fridrich Daumer (1800-1875) - one of J. Brahms' favourite poets. The refined, filigree contrast musical-poetic miniatures of the cycle demanded deep philosophical generalization - original Postlude, and Brahms involves in orbit of these cycles of waltzes Goethe's poetic works.

In the letter to Zimrok Brahms continues; «I apply some news to a proof-reading ... As the publisher, you may be interested in the most graceful score that only exists: Postlude to «Songs of love» op.52. This thing is called the Rhapsody (a fragment from «Winter travel across Harz» by Goethe) for an alto, man's chorus and an orchestra or a piano. It is the best, that I nave implored, and even if dear singers don't rush to sing it eagerly nevertheless there are enough people who require such Pray ... »

When in 1874 «New songs of love» op. 65 on verses of the same author appear, Brahms again addresses to Goethe's poetry, and finishes this cycle and all triptych (op.52, op.53, op. 65) by philosophical poem-chaconne, which main theme became the Pray from «Rhapsody». Thus, the dramaturgic line is built, and the closed art concept of the compositions presented on a disk comes to light.

Unfortunately, during his lifetime Brahms didn't hear a concert embodiment of the plan. Boris Pevzner's Moscow Choral theatre for the first time has carried out the idea of the composer, having performing the works in such sequence. And for preservation of stylistic unity of all of 3 opuses of the compositions, seldom played author's piano version of «Rhapsody» is selected.

Both cycles of «Songs of love» consist of musical miniatures in which Brahms makes all scale of human mutual relations and love feelings that as a matter of fact are a basis of dramatic art of a cycle. B. Pevzner's Theatre treats «Waltzes ... » as the musical short stories united by one art idea.